​Starlight Midnight is a 15 hand black son of the great performance horse sire Grays Starlight. Starlight is very balanced stallion with a pretty head, a long neck, short back, good bone, low hocks, and a big hip. He is a very pretty mover with a huge stop. He is a NRHA money-earner and he qualified for the 2007 AQHA World Show in Jr. Heeling. He has earned over 60 AQHA points and has earned his AQHA Register of Merit.

Starlight Midnight is out of Pam Oak who is one of the best producing daughters of Docs Oak. Pam Oak has produced five money earners in addition to Starlight Midnight including: Bob Acre Oak $114,880, The Pidge $21,580, Uno Desperado $13,525,Pamelas Little Uno $8,392 and Marla Mccrea $7,279. 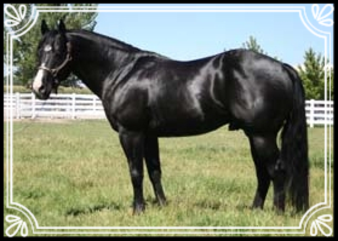