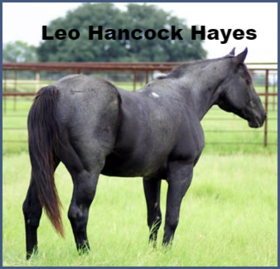 Vince Hayes also kept a few horses, including Leo Hancock Hayes, one of the last sons foaled the year Blue Valentine died. Leo Hancock Hayes' pedigree is phenomenal. He died in 2007 at the age of 27 and was owned by the Brookings in Lohn, Texas. 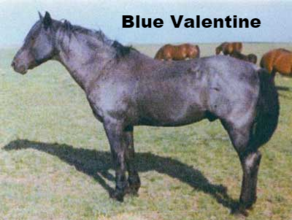 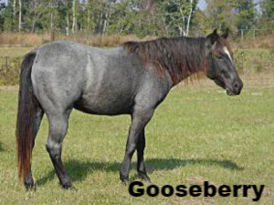 ​Another son of Blue Valentine was Rowdy Blue Man. A line-bred blue roan son of Blue Valentine out of a Blue Valentine granddaughter - like many of the Blue Valentine get - he remained in the Hayes-Merritt partnership. Hyde Merritt used him, along with Gooseberry, as his pasture sires. Chip said just about any horse his dad had could be bought for the right price except Blue Valentine. He was not for sale at any price. But an offer was made on Rowdy, so Hayes Brothers and Hyde made the decision to sell him. Chip Merritt, who had roped calves on Rowdy, admits it was probably one of their biggest mistakes. Fred Jones of Lamesa, Texas bought him, and eventually Rowdy came to a permanent home at the Wagon Wheel Ranch, Lometa, Texas owned by Fred Gist. The popularity of Blue Valentines in Texas and the Southwest are due to Rowdy Blue Man and Fred Gist's efforts. Used almost exclusively in pasture breeding, Rowdy sired 267 registered foals in 22 foal crops. True to his genes, Rowdy was a prolific sire to the end. In 2001, Rowdy was kicked during pasture breeding. He had to be humanely destroyed at the age of 24. His offspring are very much in demand.​

Blue Valentine was foaled in Benson, Arizona, on Kenny Gunter's ranch and later purchased by Dell Haverty.  Dell, whose wife was a daughter of Buster Hayes of Thermopolis, Wyoming, took Blue Valentine to the Hayes Brothers Ranch & sold them half interest. During the Hayes/Haverty partnership, Blue was hauled south in late summer for Dell to use at the fall and winter rodeos in the Southwest and for the early breeding season in Arizona. He was then hauled back up to the Hayes Ranch for the late spring breeding season and for roping at Cheyenne Frontier Days & other Wyoming summer rodeos. Blue was used for roping, ranch work, & steer tripping on calves weighed 800-900lbs. In 1968 Haverty's daughter barrel-raced on Blue (he had never run barrels) and took 3rd at the Casper, Wyoming pro rodeo, an all-girl competition. Over the years, many members of the Haverty, Merritt, & Hayes families took their turns competing on Blue Valentine in rodeo events. In 1980, at age 24, he died from a colic-induced ruptured intestine. That year Buster Hayes was killed in an accident, his ranch was sold, and the Hayes Brothers broodmare band was dispersed. In 1983 Hyde Merritt was also killed in an accident, and his family sold the ranches and most of the horses from his lifetime breeding program. Hyde's wife and son Chip kept some mares & two stallions. Chip has since spent years rebuilding a Blue Valentine herd and legacy of horses known for their gentle disposition, bone frame, good feet & minds. 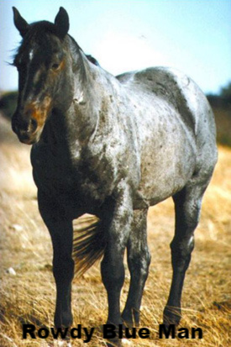 ​​​​Gooseberry, a 1973 red roan (bay roan) son out of Blue Valentine and out of Fox Hastings by Plenty Coup, eventually became Merritt's replacement stallion for Blue Valentine. Hyde had looked for a stallion with close Joe Hancock breeding to breed to his Blue Valentine mares and couldn't find one he liked any better than his own Gooseberry.  Normally several stallions would be wintered together in the same pasture and gathered about April to be turned in with the mares. In the spring of Gooseberry's eighteenth year, when the stallions were checked in March, they were all there.  But April 1st when they were to be gathered, Gooseberry was missing. It was rough country and much of the pasture was only accessible horseback. For that reason, they dismissed the possibility that he might be stolen. They scoured the pasture and even flew over it but could never find his carcass. His disappearance remains a mystery to this day. But he left his mark on the industry through several good sons including Blue Crusader, Rojo Berry, Valentine Red Rogers and Plenty Try.   Plenty Try was used by Chip Merritt until 2002 when he was sold and shipped south to mild Texas winters.